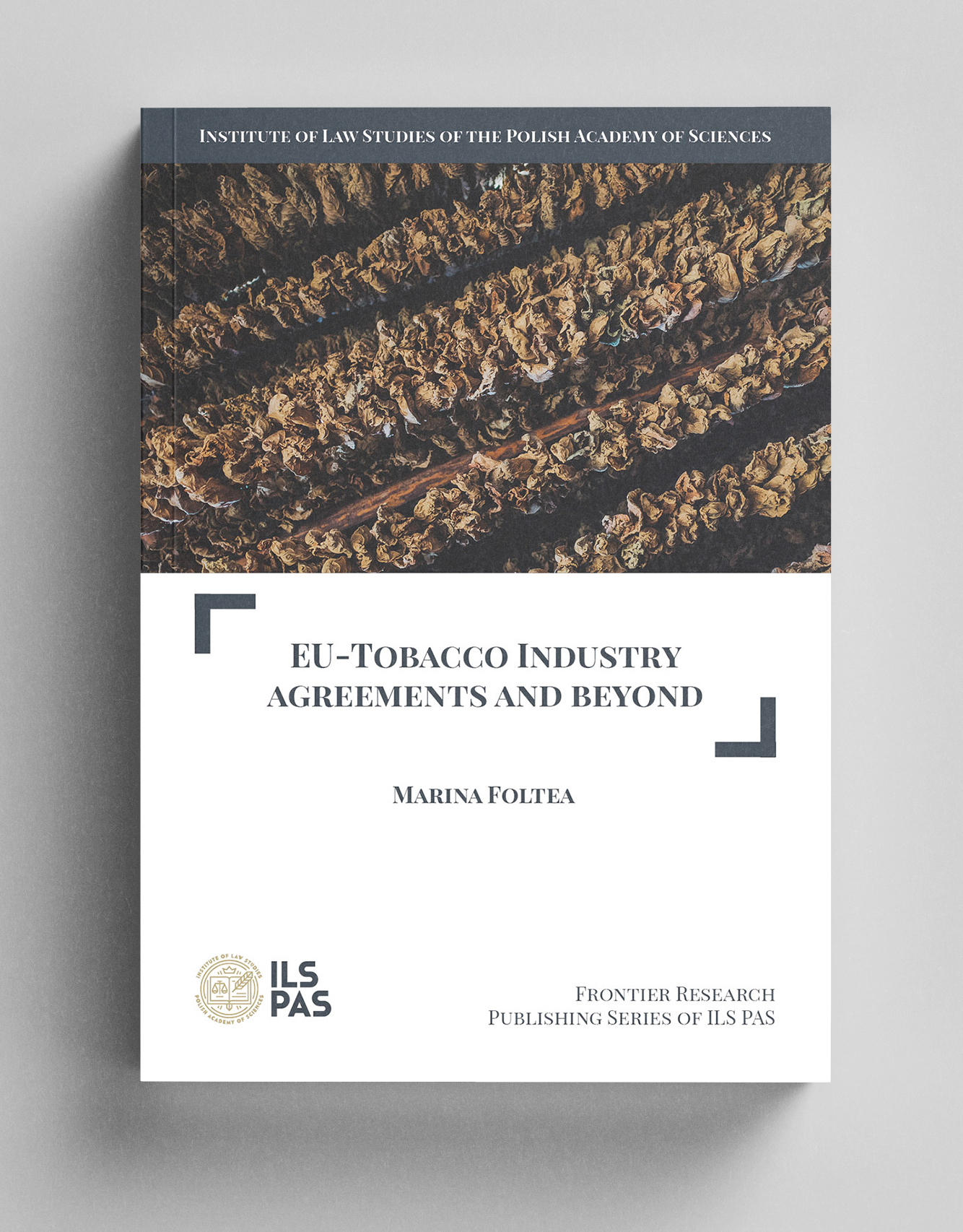 The Institute of Legal Sciences of the Polish Academy of Sciences has published the first electronic monograph in the series ‘Frontier Research’ – the work by Marina Foltea entitled EU–Tobacco industry agreements and beyond – which is the result of a project implemented under the PMI Impact programme.

It is estimated that the fiscal revenues of EU Member States from the legal sales of tobacco amount to over €90 billion per year. At the same time, the illicit trade in tobacco products undermines public health and leads to significant tax losses for governments of more than €10 billion per year. Tobacco smuggling undermines public health policies and is a major source of revenue for organised crime.

Attempts since around 2001 to hold international tobacco manufacturers accountable for the tobacco products in their supply chains have led to cooperation agreements with the European Union (EU) and its Member States. These agreements have contributed to a significant reduction in the illicit trade of tobacco products in Europe. However, market dynamics have resulted in the substitution of these manufacturers’ products with similar – illegal – products.

In her monograph, Dr Marina Foltea analyses the importance of the industry agreements for combating illicit trade in the EU, the post-agreement reality and the role that other or similar agreements at the EU or Member State level have played and may play in the future. Pointing out the benefits for the parties to four sectoral agreements (with Philip Morris International Inc. [PMI] of 9 July 2004; with Japan Tobacco International [JTI] of 14 December 2007; with British American Tobacco Holdings [BAT] of 15 July 2010; and with Imperial Tobacco Limited [ITL] of 27 September 2010), the author cites criticisms of them and the technical assessment of the European Commission.

The WHO Framework Convention on Tobacco Control (FCTC) – particularly Article 5.3 – and its subsequent Illicit Trade Protocol (ITP) have had a significant impact on the development of the cooperation between the EU and the Member States and the legal tobacco industry. As a number of new instruments to combat illicit trade emerged, it became necessary to review existing agreements with tobacco manufacturers. The way forward is set out in EU Tobacco Products Directive 2014.

These changes raise important questions for further action: What are the history and lessons learnt from the industry agreements? Are their benefits fully addressed in TPD 2014? Is there still an avenue to work with the legal tobacco industry and what challenges need to be overcome in this area? Analysing current trends in the illicit trade in tobacco products in the European Union, Dr Foltea makes recommendations on the optimal relationship between the EU and tobacco industry players.

Published in the Open Access model under the CC-BY 4.0 licence, the publication is available in the e-Law Library.

The research that resulted in this monograph was funded by PMI IMPACT, a grant awarded by PMI. The author has maintained full independence from PMI in the course of her research; the views and opinions expressed in the publication are those of the research team completing the grant and do not necessarily reflect the views of PMI. Responsibility for the information and views expressed in the publication rests solely with the author. Neither PMI nor any of its affiliates, nor anyone acting on their behalf, can be held responsible for any use made of the information contained therein.

Spis treści
Wstęp
Abstrakt
This website uses cookies to provide services at the highest level. Further use of the website means that you agree to their use.AgreedFind out more